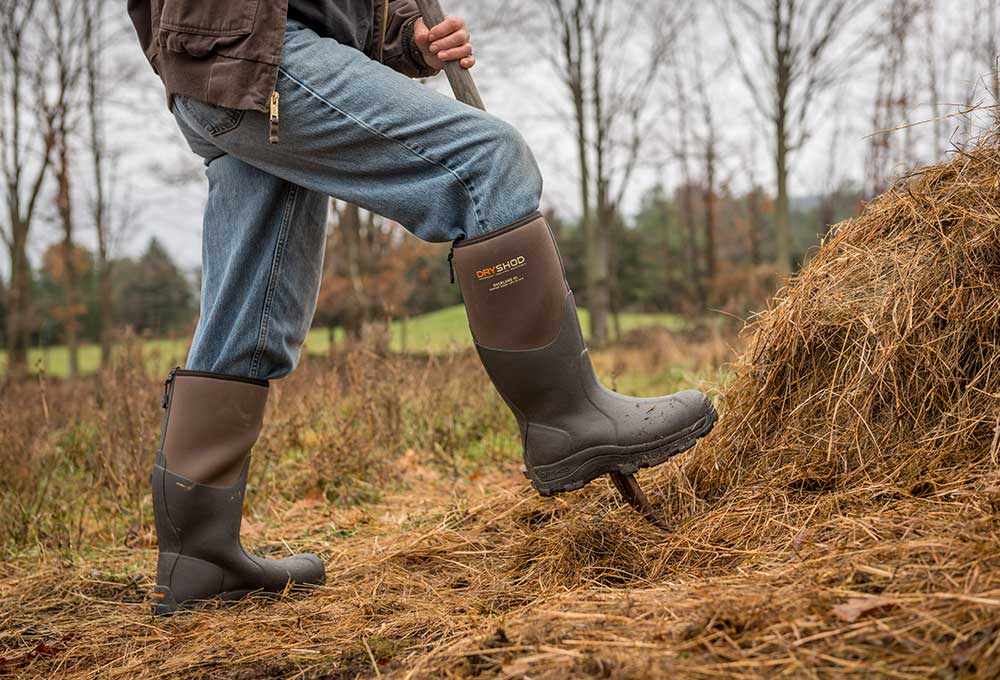 Dryshod vs Muck – Which Boots Are Better?

Dryshod vs Muck – Which Boots Are Better?

That’s why in today’s article, we’ll be comparing two popular boot brands: Dryshod vs Muck to see which one of these brands is most worth your money. We’ve surveyed users, we’ve collected data, and here are our findings!

Don’t have time for the whole article? Here’s the most important bit. While both Muck and Dryshod have similar performance, consumers overwhelmingly preferred the Dryshod boots.

Right out of the box, it’s immediately noticeable that the Dryshods are better constructed. Many consumers were also dissatisfied with the performance of Muck boots in brush, which causes rips in the neoprene lining, while Dryshod was more durable.

If you’re looking for a chore boot for farm work, most consumers here preferred the Dryshod and made less warranty claims when compared to Muck. However, some people do prefer the fit of Muck boots, and they are universally loved for ice fishing because of the fact that they have excellent ice traction, and Muck’s Arctic Ice model handles temps down to -60F.

Both Muck and Dryshod have excellent performance in cold weather situations. Dryshod boots feature nano-scale hydrophobic coating for repelling water and to prevent them from icing up in freezing temperatures.

However, if you’re working in extreme cold situations, the Muck Arctic Ice Sport model offers protection in temps down to -60 F. Muck boots are a favorite for ice fishermen due to this reason, and because they have excellent ice traction, so keep that in mind.

Thanks to its 4-way stretch mesh lining, Dryshod boots are more breathable than Muck boots. While Muck has a similar material, it’s meant to offer additional warmth, and that means if you don’t live in extreme temps, the Dryshod are probably better to avoid sweating.

Surveyed consumers seemed pleased with the durability of both boots. However, Dryshod has a reinforced tuck board and aggressive outsole, which just feels more durable than Muck boots. Though, in this category, both seem to be a good choice.

Sizing for both boots was a bit confusing for consumers. So, you’ll likely want to buy from a site like Amazon, which offers a generous return policy in case you do need to return them. Getting the perfect fit is important with boots to avoid problems.

However, if you have wide feet, the Dryshod big Bobby is made for this purpose, and you might want to go with this one. Though, Mucks tend to have ‘unisex sizing’, so if you’re woman, it’s more likely you’ll find a size appropriate Muck boot compared to Dryshod.

Value for the money?

Most consumers were very pleased with the value they got for the money with Dryshod boots. For Muck, the reviews are a little more mixed, and while some consumers were happy, others not so much. Though this mostly had to do with confusion surrounding sizing and the reduced comfort from not having properly fitting boots. Again, buy from a place like Amazon with a no questions return policy.

What Consumers Had To Say

Consumers were overwhelmingly positive in regards to the Dryshod boots. Very few responses mentioned Muck positively other than for fit reasons, and those consumers also noted that while they did like them, they did not have good longevity.

“After looking at both, I could tell the Dryshods were a much better made boot than Mucks. They have been great, they look like a clone of the Muck boots, but they are much nicer”.

“Tried Muck, Bogs, Lacrosse boots but the Dryshod boots were the best quality. You could tell immediately they were made with premium materials when compared to other brands.”

“Ended up getting Dryshod because of their much stiffer shank. The Mucks in the store had a soft shank and I was not comfortable standing on climbing sticks while hanging stands in them.

“I tried both of them on and ended up buying the Mucks. While the quality of Dryshod looked great, the Mucks just ended up fitting me better.”

In closing, while the Mucks have their place, consumers have spoken. The Dryshod boot is superior for most applications save for ice fishing, and it’s likely you’ll be the most happy if you go with this one.

These were the most popular boot models for both brands from consumers surveyed.